As mentioned in my previous post, my father drives an old rusty van loaded with the tools of his trade. Again, we arrived at the post office at the same time, and -- as we did earlier this week -- stood outside and talked a while.

I happened to have my camera with me, and snapped a few shots, three of which are posted below. 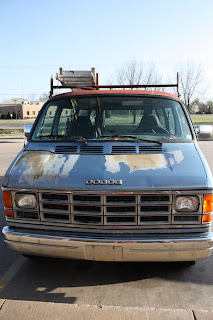 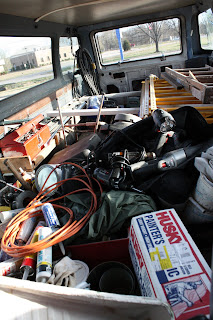 I wish I had the cash to get him one of those utility trucks, with all those nifty compartments and storage spaces, but I'm a writer (aka "starving artist"), and my own truck has a cracked windshield that it's sported for the last few years. 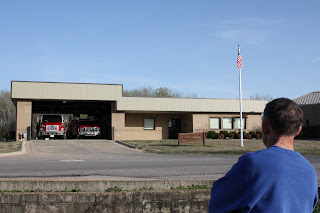 Across the street from the post office is City Hall and the Fire Department. Inside the truck bay are two flags: the Arkansas flag, and the American flag. Unfortunately, my lens is too short to capture them from a distance.

When it comes to writing fiction for the past couple of weeks, I'm in suspended animation, hovering over the words, ready to record them, but ideas and creativity are trumped by exhaustion, and I lose what I intended to say. When I do write, it all looks like drivel.

So I read. Until I fall asleep. It's always a little disconcerting to waken in the night with one's nose resting firmly in the crease between the pages of an open book, or to be startled out of deep sleep by the solid thud of a book falling to the floor. And falling asleep with one's face pressed against the pages as if the book were a pillow--I recommend not drooling.

I've been re-reading the Barker & Llewellyn series by Will Thomas. Good stuff. I enjoy reading mystery novels, and these are particularly well written. I'm hoping to stuff my head full of excellent examples so that my own creativity will kick in again.

Tuesday night after work, I stopped by the post office to check my box before heading home, and Dad was there in his old blue beater of a van that's loaded with tools, a ladder strapped to the rusted roof. We talked for a bit, and then he invited me to share supper: beans and cornbread, Southern staples that are also comfort food for those of us who grew up on them.

Sitting at the small table in the old house that's still in the process of being remodeled, and spooning my share of the beans into a bowl while hanging out with Dad made me think of stories -- not ones I am trying to tell, but ones I was told. Sometimes they were simple and quick, sometimes they were complicated, but always there was suspense, and very often a punch line. The true stories were often the funniest. And the scariest.

My own writing lately has been bloated, self-important, cartoonish. I've been ripping out scenes, cutting dialogue, showing no tolerance for anything that smacks of "look at me" or "my, my, aren't we important". But even that sort of writing (editing) has eluded me this week. I just want to sleep.

Now, for a book with a soft cover, just in case it becomes a pillow--
Posted by Keanan Brand at Wednesday, March 24, 2010 3 comments:

I guess it's fitting that ScriptFrenzy begins on April Fool's Day.

Hey, I finished over the goal line this past November with well over 50,000 words for NaNoWriMo, so 100 pages of screenplay should be a decent but not unreachable challenge.

Says me, who hasn't ever written an entire screenplay in my life.
Posted by Keanan Brand at Monday, March 15, 2010 2 comments:

The laptop is on the fritz, and -- being an Apple product -- requires some travel to the nearest qualified service center in a thriving city about an hour and a half north of here. Living in a small town on the Arkansas-Oklahoma border puts me close to a lot of historical sites and within three or four hours of some big cities, but it also means I'm in somewhat of a hinterland.

I like that word: hinterland. It's old, it has heft, and there's a cool cadence to it.

Not that I mind hinterland. It's quieter here. In my town (which now boasts four stoplights), I can hit the post office, the bank, the grocery store, and the video store in the span of fifteen minutes. I can go all the way across town to my favorite gas station, fill up the truck, and take "the long way" home, and still only use up maybe twenty minutes. Twenty-two, if the lights are against me and there's traffic.

What does any of this have to do with adventures in fiction?

It's in small towns like this that I grew up, learned to explore, first let my imagination go free. Not at first did space ships or dragons play any part in that imagination. While other kids played cops-and-robbers, or spread their arms wide and ran around like superheroes, I walked among the trees and looked up at their sky-scraping branches and pretended to be a pioneer crossing the continent, a scout mapping the New World, or an Indian on a hunt. Then I discovered superheroes, and imagined all sorts of fantastical powers for myself. I was, of course, the superest of superhumans. Which led to fights with my cousins and brother. After all, who doesn't want to be the superest?

A couple days ago, a friend shared an awesome idea for a story, and it reminded me of daydreams and nightmares and bizarre tales of the fantastical that I read when I was a kid. And it punched me in the gut, too, because I realized how much of a grownup I've become, and how little of that crazy imagination remains. Where's my sense of wonder? My belief that just because you say it isn't so doesn't mean it can't be so? After all, I made it up, didn't I? Must mean it's possible. Eventually.

Yesterday afternoon, while I burned trash and sticks and tossed dead leaves over the flames just to watch them drift upward with the smoke, I realized the little kid isn't gone. He just needs a reason to come out and play.

So maybe I'll be writing silly things during the next few months. Maybe they'll be totally insane. Maybe -- if I put my arms out wide and run as if there's a cape on my back -- maybe they'll be super.
Posted by Keanan Brand at Sunday, March 14, 2010 No comments:

Last night, while trying to decide how to proceed with Episode 12 (still untitled) for Thieves' Honor, I realized I was telling the boring stuff, and needed to leap to other characters.

But how can a fight scene be boring, you ask? Very easily, as a matter of fact. "Yawn, sigh, been there, done that. Now tell us something new." At this point in the story, we should know Kristoff and crew are creative when backed into a corner. Showing how they get out of this particular sticky situation was hinted at in the very end of the previous episode, and could be implied by simply cutting to the action that occurs afterward. Meantime, there are other characters jumping up and down offstage, eager for their stories to be told:

1) Kristoff's antagonist-but-not-enemy, Captain Zoltana, is in the brig. That's a reversal, since she's a law officer.

2) Finney's been rescued by rebels, but they may not be as friendly as they appear.

3) And there needs to be the introduction of a real nasty, a villain that's worthy of the title.

So Episode 12 is still in the works. But have no fear, faithful readers! We shall see the further escapades of Lieutenant Mars and Ensign Gaines as they endeavor to leave the Orpheus and still maintain their invisibility. In fact, that's the only part of the episode that shall remain, as I toss everything else and start anew.

Also last night -- and in the wee hours of this morning -- I was caught up in re-reading and editing the second manuscript of the fantasy cycle. Since this portion of the work has been sitting fallow for a few months, I was able to read it with sufficient objectivity. There's a clunkiness to what I once thought elegant prose, and there's a lot of repetition that I jettisoned, quick as I could execute the "cut" command.

There's a certain twisted joy in watching my own words disappear. What I thought I needed, well, it was only so much dead weight, and now I move forward with a spring in my step -- or, perhaps, a razor in my pen.
Posted by Keanan Brand at Sunday, March 07, 2010 2 comments: 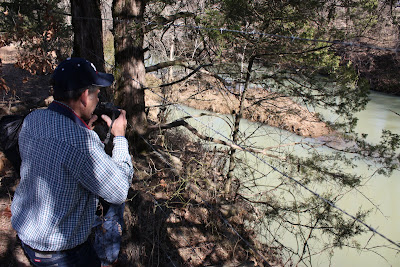 This past Saturday, I hung out with Dad, tromping across a cousin's land in Oklahoma, taking photographs "until the cows came home", trying to make brown landscapes and barren trees look interesting, collecting images for story fodder, learning how much of an amateur photographer I really am.

Laughing, talking, exploring. One of the best days ever.
Posted by Keanan Brand at Monday, March 01, 2010 No comments: