reposted from Adventures In Fiction via WordPress

Last week, a fellow editor/writer and I met to work out a few details on a project and ended up hanging out until after dark. We ate supper at The Garage -- great burgers and tasty fish tacos -- and I brought the camera for our stroll, just in case. Unfortunately, it had the short lens (shallow depth of field, 1:1 ratio), so there's less detail and more blurring than I'd like.
This first image is of a parking garage, looking rather sci-fi or action-scene-like:

I edited the next photo to show the heat map, because the dim lighting was insufficient to show detail, such as the spiral fire escape strung on wires above the common space between two buildings. It's surreal and quirky and cool, but something keeps me from wanting to walk underneath it. ;)

The image below is a fuzzier version of one I shared on Facebook a few days ago. It's the Devon Tower in downtown Oklahoma City, otherwise known as the Eye of Sauron.

Miscellaneous images below of old buildings, Christmas lights, and alleyways:


Below are variations on a theme. These images were taken before I departed the parking lot beside the alley. I was ready to drive away, but caught sight of the spiral fire escape in my rearview mirror. The result is a surreal mix of that reflection and of the alley beside the car.
The ghostly figure in the background is of a passerby walking her dog.

Something tells me I need to spend more time downtown, and this time bring a tripod to help hold the camera steady.
NOTE: all images property of Keanan Brand
Posted by Keanan Brand at Sunday, December 13, 2015 No comments:

The Shock of Night 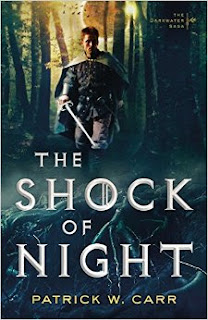 Welcome! Step inside for Day 2 of The Shock of Night blog tour. (My brief introduction to this month's feature novel for the CSFF Blog Tour can be read here.)
Due to life-related factors, today's entry will be equally brief. Others in the tour have delved into the writing itself and the spiritual and theological aspects of this fantasy-mystery tale, but I was struck by the inclusion of a PTSD-stricken protagonist (although such modern terminology was not used). In Carr's previous series, the hero was an alcoholic young man who was abused since childhood -- not typical fantasy fare.
In this series, the hero -- Willet Dura -- is a would-be priest who was sent to war, but his mind has shut out an important chunk of those experiences. Not only is part of his memory missing, he sleepwalks, and his job as one of the king's reeves means he encounters death in many forms. In fact, he has a strange fascination with it, and he questions the dead about what they know now that they're, well, dead.
I like that I can connect with Carr's fictional folk. He knows that externals do not make up a man's character, that not everything is what it seems, and that anything and anyone can change.
And they do.
Dura's study of the dead takes a step toward the further-weird when he gains the ability to read the thoughts of the living.
I wrote yesterday that this is fantasy for grownups, but I think teens would like it, too.
And for readers who don't want only mystery-solving or action scenes, there's a quiet romance between Dura and Gael, a well-off young lady whose uncle is scheming up an advantageous marriage that doesn't include Dura.
One thing that leans this story toward the grownup end of the readership is precisely that romance, and the other decisions and sacrifices that must be made. These characters aren't teenagers in a coming-of-age tale, but are already adults who've been shaped by war and torment, hardship and abuse. Even allies can be at odds with one another, and pride and ignorance still cause folk to stumble, but -- as a forty-something reader -- it's refreshing to encounter a fantasy yarn for readers older than sixteen. ;)
For other perspectives of The Shock of Night, visit these other stops on the blog tour:
Thomas Clayton Booher
Beckie Burnham
Carol Bruce Collett
Carol Gehringer
Victor Gentile
Rani Grant
Rebekah Gyger
Bruce Hennigan
Janeen Ippolito
Carol Keen
Rebekah Loper
Jennette Mbewe
Shannon McDermott
Meagan @ Blooming with Books
Rebecca LuElla Miller
Joan Nienhuis
Nissa
Audrey Sauble
Chawna Schroeder
Jessica Thomas
Robert Treskillard
Shane Werlinger
Phyllis Wheeler
Nicole White
Michelle R. Wood
Posted by Keanan Brand at Tuesday, December 08, 2015 No comments: