My characters tend to do dangerous things, but I live a very ordinary and quiet life.

Lately, however, I've been spoiling for excitement. So I decided to do something really dangerous: take photos while driving.

I know, I know. But it's the adrenaline rush, y'see.

Some of those photos can be seen in my Facebook album entitled "The View from My Truck", and a few snow-less December shots can be seen below. 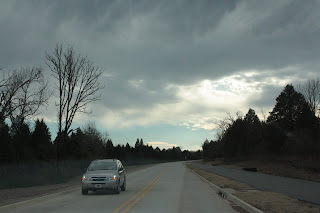 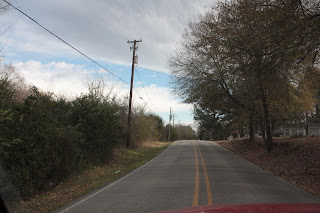 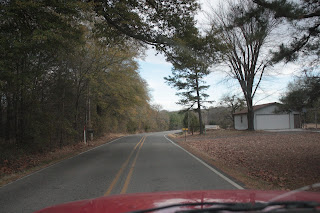 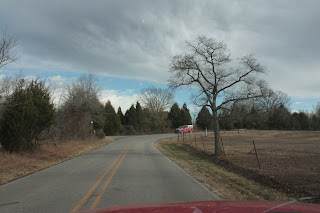 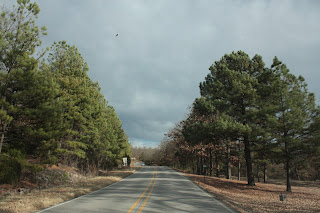 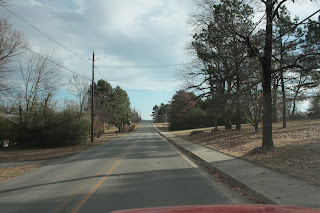 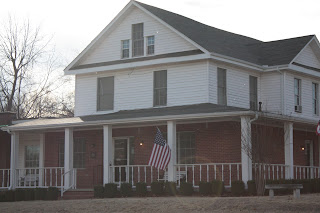 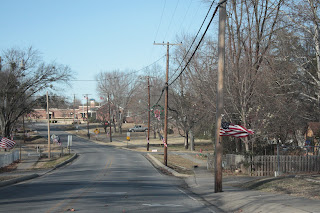 As you can see, there's a touch of Norman Rockwell around my town, and that suits me right down to the ground, as the old saying goes. After all, American flags line Main Street -- yes, Main Street -- and even adorn the front of the funeral home. Small-town America is my kinda place.
Posted by Keanan Brand at Tuesday, January 18, 2011 No comments:

Modern Mentoring and Where I Find Story Ideas

When I was a kid and discovered writing -- not as an exercise in penmanship, but as the art of storytelling -- mentors were few but encouraging. Despite my peers' lack of interest, mockery, or strange awe, I persevered, due in large part to the adults who pushed and applauded and guided my first tottering efforts.

Back then, hanging out alone with a grownup who was a stranger to my parents didn't seem like a danger. After all, that grownup was a writer who was interested in my manuscript. The help I received is remembered today.

Now, I get to be that mentor to younger writers, most of them members of the youth organization where I work. It's a public environment, and nervous parents can check in at any time. E-mail contact is kept to a minimum, and is on-target. Not a lot of chitchat. After all, the innocence of my growing-up years has been replaced by fear and predators. I need to protect myself as much as I need to protect the children.

A teen writer recently contacted me because of a book review she'd read on this blog, and that prompted an intermittent e-mail conversation. If her messages are any indication, she's enthusiastic and eager to learn her craft. It's a tightrope for me, encouraging her efforts without saying anything that might be misconstrued.

She asked a question about where story ideas come from, and thinking that something in my reply might be helpful to other writers, I've included the excerpt below (edited to protect her identity):

This time of year has been absorbed with family for Christmas, end-of-year projects at work, and so forth. Not as much writing as I would like, but I've made a little progress. Some writers schedule time every day to write, and I've tried that -- in fact, I do it when I participate in National Novel-Writing Month in November -- but it's not something I can keep up forever. Rigid schedules are not for me; unfortunately, perhaps, because following a schedule would very likely make me more productive.

I'm also easily distracted by the stories that others tell: movies, books, TV series ... I love stories! But I need to write my own.

In your previous message, you wrote: How do you go about discovering new ways of writing other than through reading?

Ever write down your nightmares? Your good dreams? Your crazy dreams? I generally keep a notebook and pen beside the bed for just that reason, or to record the fantastic ideas that often come just as I'm drifting off or waking up. There's a scientific reason why our brains do that -- make connections or operate creatively at those moments -- but I can't recall the precise details. Suffice to say, be prepared to record whatever your subconscious mind decides to bring to forefront. Some stuff may be totally wacked out, some of it may be brilliant -- write it all down.

I  can get story ideas from just about anywhere:

1) visiting historic sites, museums, galleries (ruins, exhibits, paintings -- all good story material);
2) walking around town or in the countryside while taking photographs;
3) catching sight of something while I'm driving down the road:
4) listening to an old song, an interview, a news story, etc., on the radio;
5) looking at book covers in the store or at the library;
6) observing people in the park, the mall, an event (listening to their conversations or watching their expressions and interactions can help with character creation and/or conflicts);
7) hearing or remembering old family stories, with their mix of fact and fiction, and shaping them into something new (I did that with an award-winning short story once);
8) using Bible stories as the framework or inspiration for a modern-day version (you might check out some of the historical fiction by Liz Curtis Higgs -- I know she's done that);
9) using my own life -- but sometimes years have had to pass before I could write about troubling events;
10) talking to my brother, his wife, my dad or mom, friends, people who are experts or know about certain topics (bouncing ideas off trusted people or gleaning ideas from people who are pros in their fields can lead to good stories).

There are probably many more ways stories have come to me over the years. You'll have your ways, too.

I recall visiting a nearby Civil War battlefield on a Sunday afternoon with my family. A friend had come with us, and we we'd eaten dinner after church then went to the battlefield. There are some cabins on the grounds, and they house museum exhibits, etc. I was fascinated. My friend was bored. This person thought I was morbid and weird because I kept staring at a blood-stained, bullet-hole-riddled uniform while imagining the terror, the pain, the soldier must have experienced. And then there's the vast silence of the battlefield -- just looking at it, listening to the wind through the wooden fence, seeing the tall brown grass bend, can bring tears to the eyes. How many dead are still buried there? What carnage did this land, that forest, see? I stood, overwhelmed, on the edge of the battlefield. Behind me, my friend complained.

I don't think that person ever hung out with me again!

But that experience, more than all the historic books I've read or war movies I've seen, brought home the bigness of war.

I've never been in the military, but my father is a Vietnam veteran, so I'd heard his stories and seen the effects of war on his life. That has helped when I write about men involved in war.

So, whaddya think? Encouraging and informative?

One of my writerly resolutions for the new year is to improve my approach to editing and critiquing the work of other writers. If you follow television, you'll understand when I say I'm more House than Wilson, which is not exactly encouraging to old hands let alone new writers. But I'm trying.

Just as one becomes a writer by writing, I hope to become a better mentor by simply mentoring.

(lifting my favorite pen) Here's to a new year of words, stories, and crazy imagination.
Posted by Keanan Brand at Saturday, January 01, 2011 1 comment: