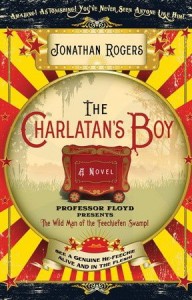 ** Once again, a late entry. I do apologize for the tardiness. Life and all that, y'know. **

This is the third and final day of the December CSFF Blog Tour featuring Jonathan Rogers' excellent new novel, The Charlatan's Boy

This post could be called "About a Boy", but that title is already taken, and there aren't any stutter-prone British actors playing roles opposite a quirky kid who just needs encouragement to participate in the school talent show. (That's about all I recall of the movie by that name, and shall never watch it again.). Therefore, "The Charlatan's Boy - Day 3."

I could stop there, because his exterior ugliness is central to the story, but it doesn't begin to tell the truth of the tale.

Here's a kid who wants to know where he came from, who looks into the faces of passing strangers, trying to see if they recognize him as their son. He is used as the main attraction in a huckster's traveling road show -- ahem, con game -- and that fraud, Floyd, is the closest thing to a father Grady has known. Grady's ugliness is only skin deep; Floyd can't see his own ugliness, buried as it is underneath pride and a fairly normal appearance.

Grady wants to be honest. He wants to live a steady life, maybe as a farmer or a villager. He's even given a chance to become so when Short Fronie, the proprietress of a public house, offers to be his sort-of mother since all her children are grown and gone. But, even though Grady knows Floyd isn't good for him, even though he really likes Short Fronie and wants to stay, as soon as Floyd tosses a kind word his way, Grady jumps up and follows him, this time into a new scheme to cheat coins from gullible crowds.

As I read the book, I was reminded of my own childhood spent on the fringes of normal. I was that chubby kid who was rarely picked for a team until the pickings were pretty slim. Agility was not my strength; I lost count of how many times I fell down because ankles simply refused to hold me upright. (I even broke an ankle and never knew it until damaging it again as an adult, and the doctor found the old break. Go figure.) Acceptance was a rare thing. Respect? Only for my mind -- I was "the smart kid" in the class, and the jocks would ask for my help with their homework, but I was never invited to be part of the group. The nerds and the geeks were my crew, and I was a little strange even among them.

A year away from 40, I still recall being on the outside, wondering if I really belonged in this world, always on the lookout for a face that told me I was all right.

Grady does indeed find his origins and where he belongs.

Small spoiler (run cursor over this paragraph to read): Readers who recall a favorite character from the preceding three books (The Wilderking Trilogy) will very likely enjoy knowing that a family member appears at the end of The Charlatan's Boy, someone with the last name of Turtlebane. And that's all I'm gonna say!

I highly recommend this book to young and old alike, and encourage everyone who hasn't done so already to catch the previous books: The Bark of the Bog Owl

, The Secret of the Swamp King

, and The Way of the Wilderking

Meantime, check out other stops on the blog tour by accessing the list here.
Posted by Keanan Brand at Wednesday, December 08, 2010

What a great post, Keanan. Growing up is not for sissies. How very cool that you work with kids and can give them some of the love that kids so desperately need. And even cooler that you're sharing Jonathan's books with them.