How to Write Your Best Story: a rambling review 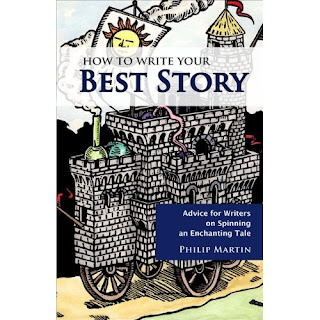 A few months ago, Philip Martin, a fellow writer and editor (although he's more established and "serious" than I am in the editing realm, and he has fingers in all sorts of literary pies), asked me to read through the manuscript for How to Write Your Best Story: Advice for Writers on Spinning an Enchanting Tale (128 pages, $14.95, Crickhollow Books).
I've been writing since I was nine or ten years old -- not very well, but often and copiously -- and I've lost count of the writing conferences, seminars, and classes, and groups I've attended, but the greatest learning has come from the simple act of writing (and revising -- a lot), and the best advice has come from sitting down and talking to other and better writers. Reading How to Write Your Best Story is rather like one of those conversations: down-to-earth, intelligent, understandable, and useful.
Aside: Did I mention that my first conversation with Philip Martin was several years ago at a writers conference? Yep. I attended his session (I forget the topic), then asked him to autograph my well-read copy of his recent book, The Writer's Guide to Fantasy Literature: From Dragon's Lair to Hero's Quest, a Brothers Hildebrandt painting of Smaug on the cover, which just makes a good book that much cooler. I'm not usually the groupie / fanboy type, and I certainly don't go around asking other folks for their autographs, but this time, it just seemed like the thing to do.
Now, back to our regularly scheduled programming.
"Never judge a book by its cover" is old advice that isn't always true. After all, most of us have seen plenty of cheesy science fiction covers with awkward robots or scantily-clad alien women, or trashy romance novels decorated in shirtless men with impossible hair or women in torn bodices. We look at those covers, and we pretty much know what we're gonna get. (I'll take the science fiction -- hold the cheese -- over the lurid romance any day.) The whimsical cover art for How to Write Your Best Story is the reader's first clue that the contents are written by someone who knows and appreciates a good story, and probably read his share of them. (The artwork is by the late Marvin Hill.) What I like best about this book of advice is that it's less about rules and more about principles of good storytelling:


Good storytelling exists in a world outside of formal structural elements of literature. It has intangible aspects, like a beautiful melody or an appealing fragrance. It exists in imaginary worlds you know well, like the 100 Acre Woods, or Narnia, or Lake Woebegone, or in mostly real worlds, such as a humorous journey on the Appalachian Trail with Bill Bryson -- or in any number of great books based as much on storytelling as anything else. (p9)


(F)or a good number of years, I've pondered the question: is there a way to teach good storytelling, in the fashion of Kipling, Steinbeck, C.S. Lewis, O. Henry, Tolkien, or other beloved writers classic and modern -- successful authors who we'd all agree knew a good story from a hole in the ground?

What do readers look for in a good tale? What specific techniques do I find myself most often recommending to emerging writers to boost the quality of their stories? (p10)

That's what Martin endeavors to do in the rest of the book, and he does it with a whimsy to match the cover art, by telling a story interwoven with instructive chapters. After the Introduction, for instance, is the beginning of "The Princess & the Apple", followed by Part One: General Things about Good Stories, followed by the further tale of "The Princess & the Apple", which is interspersed among these chapters: The Case for Intriguing Eccentricity, The Case for Delightful Details, and The Case for Satisfying Surprises.

Included are many quotes from the works of famous authors and poets, including this quote from Joyce Carol Oates:


"Storytelling is shaped by two contrary, yet complementary, impulses -- one toward brevity, compactness, artful omission; the other toward expansion, amplification, enrichment." (p25)

That's a push-pull war in which I constantly engage: what to leave out, what to add, what must be spelled out, what can be implied, what's trivial, what matters.

A few more examples of advice from the book:

How to Write Your Best Story is chock-full of good, perennial advice, but it's also fun to read. This book will remain in my permanent library, and that's just about the best recommendation I can give.