This month's CSFF Blog Tour features the first novel in The Ancient Earth trilogy,  The Realms Thereunder, by Ross Lawhead. 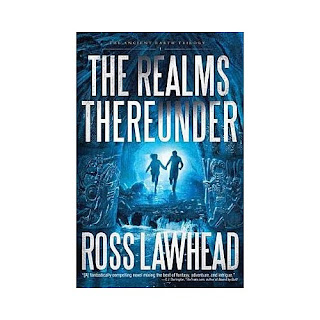 Yesterday, my eldest niece supplied her teenage opinion of the book (click Day 1 to read what she had to say); today, I'll discuss several passages from the first quarter of the book -- not to give away too many spoilers, but to share some things that struck me.

First, I like the language. There's a grandness in places, yet a grounded-ness. Not only does it help me visualize the story's world, but fires my imagination, driving me back to all the unfinished tales waiting their writer's return.

Second, I enjoy a well-written prologue. The Realms Thereunder opens with some foreshadowing, a fun bit of storytelling among the patrons of the Swindlestock Tavern -- an excellent and evocative name for such an establishment.

Now, for specific passages from the first 100 pages of the book.

Lawhead keeps the story moving. Description mingles with forward motion, so the reader gets the picture without wading through boggy information. If I hadn't been hooked already, the scene below would have done it:

It had discarded its sunglasses and T-shirt and was crouching on the footpath, half naked and wreathed in shadows.

"Lonely little light," it said. "Dim light, faint light. All alone in a city of one hundred and fifty thousand. A fraction so infinitesimally small, it's hardly worth expressing. Statistically insignificant, equivalent to nothing."

Daniel wanted to reply, to try to deflate its gloating pride, but he was depending on the creature's conceit to survive the fight -- he had to play the role of unsuspecting prey. He set his jaw and narrowed his eyes, bracing himself for the attack. (p13)

The language, the image, the challenge -- I settled in for the ride. The ensuing encounter between Daniel and his foe did not disappoint.

A short time after that incident, the other main character -- Freya -- has a battle of her own, this one verbal and before witnesses. The debate is interesting, and she stands her ground in the face of the Oxford lecturer's mocking, but Freya later wonders if she should have challenged the woman's biased, confined thinking.


Why did she do it? what did it matter what people thought and believed, even if it was a lie? What right did she have to burst the fragile bubble of reality that people surrounded themselves with? So long as they live happily, what does it matter if they live a lie? Ignorance is a blessing. It was futile to try to wake people up, so why did she do it? (p22)

Sleepers are not necessarily grateful for awakenings, rude or gentle. Does that mean, then, they should not be wakened?

Rabbit trail #1: I've thought some of the same things Freya mentioned in the debate about historical  truth we cannot know because documentation doesn't exist, not (as she was arguing) regarding Arthurian legends and British history, but about Biblical history.

Rabbit trail #2: The use on page 18 of "Common Era" by the lecturer caught my attention. "BCE" and "CE" annoy me. I'm still a fan of "BC" and "AD", and I like that Biblical Archeology Review allows contributors to use either the traditional or modern designation, as they prefer.

Ahem. Now, back to our regularly scheduled programming.

Chapter 2 of The Realms Thereunder, "The Sleeping Knights", takes the reader back to Daniel's childhood, showing his troubled home life and his awkward friendship with Freya, who at first appears to be the confident one of the two. Roles reverse somewhat on a school field trip when solid, familiar reality -- the world we know -- gives way to the mystery and danger of a world we don't. Years later, as an adult, Freya still struggles with what she experienced then, trying to push it into someplace she can forget, while Daniel's existence is saturated with that other world.

On the school trip, the children enter a tunnel in an old church, and find two knights sleeping in a room carved of stone. At first, Daniel thinks they are models made for "a movie, like Lord of the Rings. They made models like this for that. I saw the special features" (p38). I snorted with laughter when I read this; not only does the LOTR reference up the nerdy-cool factor of the story, but I, too, have watched all the special features on the extra DVDs that accompany the Extended Edition of Peter Jackson's version of the classic trilogy.

The tunnel that appears in an archway, and the waking of the knights by a blast on a horn, reminds me of The Chronicles of Narnia, though the horn blast is hardly effectual-sounding, and the tunnel leads underground rather than into a snowy forest.


Where goest you, little aeðeling,
With father's rusty sword?
'To split the head of a tow-haired man
Who gave and broke his word.'

The story's timeline jumps from present (labeled "Eight Years Ago" / "Now") to the past ("Eight Years Before" / "Before"), but it is by no means confusing or difficult to follow. In the past, Daniel and Freya are schoolchildren, but in the present, they are in their twenties; Freya is at university, but Daniel, after service in the military, is homeless.

There's an added time element when the knights are introduced, for they are from centuries in the past, and yet appear no older than they were when they first fell asleep.


"So when we went through the arch," Daniel said slowly, "we actually entered another world?"

"Not exactly, no," Swiðgar replied. "The place where we slept was not in one world or another. Imagine a tide pool set in the shore of the universe alongside the sea of time -- an eddy where time spins in upon itself. In such a place we remained as we were first laid to rest. All who cross from one world to the next must, by necessity, pass through one of these pools. That is why, when you hear of people returning from one of those other worlds, they have sometimes been gone a day, sometimes a hundred years. There is little accounting for it, but even so, there is reason--" (p69)

The conversation is interrupted by an attack. The enemy is defeated, but the young friends have different reactions: Freya is more uncomfortable and full of dread, while Daniel is intensely interested in the swords and in this strange place.

"Where are we going again?" Daniel asked.

"Niðergeard," Ecgbryt answered in a voice strong with pride. "It is a vast holding beneath the skin of the earth. Its boundaries are not marked, and it sits upon the gates of three hidden worlds. It is the grandest of all earthly cities, yet known to only a few. Its dark spires are seen only by those who are great and dream of a larger greatness." (p73)

And there, dear reader, I shall leave you. Perchance you shall venture to Niðergeard yourself, and soon.

Click here to obtain a list of other stops along the CSFF Blog Tour, and read other reactions to the novel.
Posted by Keanan Brand at Tuesday, February 21, 2012

Really interesting review, Keanan. Thanks. (Is this Lawhead related to Steve?)

Yup, indeed he is: Steve is daddy, Ross is son.

Very thorough. I am a bit surprised at the mixed reviews from other members of the tour. I really liked the book. Thanks for stopping by my blog.

I have a feeling we'll be talking quite a bit about story structure in the blog tour. While some found the varying timeline confusing, I found it intriguing, which it sounds like you did too. Nice review. I like how you pulled out select quotes. Makes me wish I'd thought of that. :)

I thought the prologue was a great way to introduce the story. For a while I was wondering if we would revisit that tavern.

So interesting that three of you on the tour pulled out the same quote. I find that to be significant, but who's to say in what way. ;-) Nice job, Keanan. A really good look at the story.

The story is great. The only possible downside is the back and forth between the past and now, but I agree that it was not really a problem, especially with the chapter headings indicating a change in time.

Actually, this is not much more of a problem than an epic tale that has things going on in several places at once. Lord of the Rings is a perfect example. Often, though everything is happening in the present, there is a lot of back tracking. Frankly, backtracking in the present may be more difficult to follow than backtracking to the past. The past, especially in this story, had unique differences from the present that it really did help to keep things straight.

I had the same Narnia connection.