Of the CSFF Blog Tour, I mean, not of Karyn Henley's Angelaeon Circle. We're featuring the second in the series, Eye of the Sword, a well-paced novel peopled by angels, half-angels, and other fantastical beings.

Concern has been expressed about the nature of angels in the book versus their portrayal in the Bible. I'm not going to address that discussion today, other than this comment I posted on Anna Mittower's blog on Monday:


Gotta be honest: I thought the pairing of harps with angels was cliched, but the author went in an unexpected direction with both elements, so I was more able to accept them occupying the same story. As for the portrayal of angels, I immediately noticed the differences from the Biblical angels, but Eye of the Sword is a novel, not Holy Writ, so I was able to "go with it" during the story. 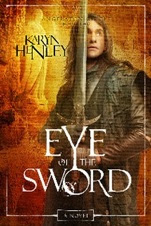 I would have liked to see angels who had nothing to do with harps, other than, say, collecting angel-and-harp jokes as a hobby.

On the other hand, Henley doesn't set her angels in the clouds with nothing to do but strum Cupid-sized instruments. A trio of harps serves a distinct, necessary, life-and-death purpose for the angels:


"I don't know what the future holds. I have to find the kyparis harps and unite them, and what then?"

"The Wisdom Tree will be restored, the angels will have their stairway to heaven, and your task will be finished."

Some aspects of the novel caused a hitch in my step: angelic beings have auras, and there are characters ("elementals") who exist in or manipulate elements. Could just be me, but auras and elementals have the tang of New Age or pagan religions.

But the elementals are cool characters -- I like them -- and the auras serve as identification among angels and Nephilim.

As mentioned in a previous post, I enjoyed Eye of the Sword more than expected, and would (and will) recommend this series to other readers in search of an excellent tale.

Great job all three days, Keanan. I thoroughly enjoyed this one too. I get the feeling from reading some of the other reviews that some participants were looking for more or something different, anyway. I thought this story was well executed and most likely accomplished exactly what the author wanted. I liked it a lot.

The angels were so far from my concept of Biblical angels that I early on quit trying to think of them as such. For me, they were more like Tolkien's elves than angels. It's unfortunate that Henley chose to call them angels instead of coming up with some other name. It's dangerous to use terms with lots of baggage in new ways.