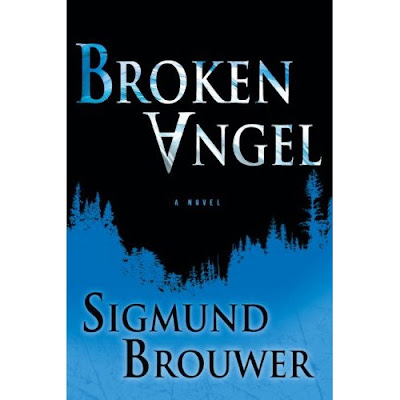 the past, Broken Angel by Christian author Sigmund Brouwer is the featured book for the August Christian Science Fiction & Fantasy Blog Tour.
I received my copy later than anticipated (had to order it online), and am still only about a third of the way through the book, but so far, so good.
Brouwer doesn't waste the reader's time. The prologue is intriguing, and though there is some background information in the first chapter, not many words are expended on the setup. The reader joins the main character and her father just before the chase begins, and the story hits the ground running.
The setting is Appalachia, now a separate entity from the rest of the United States and all of the Outside, and is overseen by Bar Elohim (translated, Son of God). However, any notion of this being a desirable state of affairs is quickly dispelled: this theocracy is anything but kind. Nor is it truly a theocracy, not being governed by God and His truth, but by men bent on keeping the populace subdued by twisted fundamentalist teaching, illiteracy, and harsh punishment.
The people are not allowed to read anything, especially the Bible, and even the clerics are only allowed audio versions from which to preach Bar Elohim's truncated selection of truth.
This brings to mind the centuries when only priests had access to the complete scriptures, and could tell the congregations whatever they wished, because the people could not read the truth for themselves. If they tried to do so and disagreed with the accepted teaching, or if they were caught translating the Bible from Latin and distributing it in the common tongue, imprisonment, torture, and death were the results.
As for the twisted fundamentalism, well,  fundamentalism is really the wrong word, since fundamental means foundational, basic, necessary, and so-called fundamentalists who take their religion to extremes have usually added something to it, or removed something from it. But the twistedness can be found in various segments of religious culture, from Christianity to Islam to Eastern cults. No matter how high-minded and noble-sounding a religion's statement of faith, there are adherents who will use those tenets to control other people. (And, if that is the case, this question remains: Are they truly adherents?)
Broken Angel is fast-paced and the writing unencumbered. I look forward to reading the rest of the story, and learning how Brouwer handles these timely and unpleasant issues.
Meanwhile, take a look at other postings about the novel at these blogs:
Brandon Barr
Justin Boyer
Jackie Castle
Valerie Comer
Karri Compton
CSFF Blog Tour
Stacey Dale
D. G. D. Davidson
Janey DeMeo
Jeff Draper
April Erwin
Karina Fabian
Mark Goodyear
Andrea Graham
Katie Hart
Timothy Hicks
Christopher Hopper
Joleen Howell
Jason Joyner
Carol Keen
Magma
Margaret
Shannon McNear
Melissa Meeks
Rebecca LuElla Miller
Nissa
John W. Otte
Steve Rice
Ashley Rutherford
Hanna Sandvig
Chawna Schroeder
Mirtika or Mir's Here
Sean Slagle
James Somers
Donna Swanson
Steve Trower
Speculative Faith
Laura Williams
Posted by Keanan Brand at Monday, August 25, 2008

Keanan, great comments! You show a lot of insight. I really like your view on fundamentalism. I think you asked the key question: can those who add, distort, ignore the tenets of the faith really be called adherents?

I say, No. But in so doing, I'm risking others using my same rationale but with judgmentalism. How can I say I'm qualified to rule someone not an adherent but others aren't? It starts getting quite sticky!

I had the same thought about the days when only priests could read the Word and the commoners were cut off from reading for themselves. Scary. This book not only made me think, but was entertaining as well. Won't spoil the end, but I'd love to know what happens later...

Becky and Carol - Thanks for stopping by. I'm still reading the book, but hope to be finished with it by Tuesday night.

There's a narrow distinction between "judgmentalism"and "judgment", the first implying a negative attitude that views other people as inferior or sinful compared to one's own beliefs and actions, and the second implying wise action, common sense, or an act of justice.

And good judgment tends toward truthfulness, whether such will be construed as "judgmental" or not. If a practice is screwy and un-Biblical, it is not judgmental to say so. There are things we can know as absolute truth.

However, it is when we try to twist truth--to achieve our ends rather than God's--that we err.

And this, of course, is my view of things. If someone else has another view, please express it.