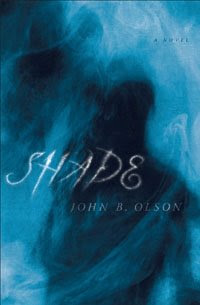 This is the third and final day of the Christian Science Fiction & Fantasy Blog Tour for November. This month's featured book is Shade by John B. Olson.

Today, I'll include some of the positives (in my opinion) of the story.

1) Secondary character Athena was my favorite of all the characters: sharp-tongued, sharp-witted, dark-humored, tough-as-three-layers-of-fake-nails kind of street girl who sees through the lies and wants something better for herself than the false lives her "friends" pursue.

2) Malchi is simple, in that he was raised with a simple purpose and was kept outside the mainstream by his teacher, who may or may not have done him any favors by doing so. This mysterious mentor certainly did not pass along the entire truth of Scripture or of God, despite the underlying truth he did impart to Malchi: Mankind must stand against evil if it doesn't want to be consumed by it.

3) Hailey, well, hmmm. I knew I was supposed to like her--she's the heroine--but I just couldn't connect.

5) Detective Smiley--Good guy? Bad guy? I liked that he was so ambivalent. The reader might even feel a little sympathy for him at one point in the story.

And, speaking of ambivalence, about three-quarters of the way through the book, the hero Malchi is presented as a possible villain himself. Hailey isn't sure of him: Is he her protector, or does he really want to kill her?

6) Sabazios is presented as a classic vampiric type, all suave and handsome and smoothly persuasive. He's scary, yes, but his minions seemed scarier.

1) Athena's storyline -- She starts her fictional life as a supporting actor; by the end, she's center stage. Her actions are crucial to the climax of the story. And there's just something about the way she's written that makes me believe her.

She loaded a plate with a huge mound of food and started eating in earnest. A couple of women glanced her way and broke out in tittering laughter. Fine, let them laugh. She wasn't hiding anything. Turtleneck had looked her in the eye and walked on by. They could laugh all day for all she cared. She was starving.

Setting her plate down on the table, she filled a plastic cup with blood-read punch. The sweet liquid burned as it went down, warming her from inside out. She added another ladle full. Another. The best way to hide was to fit right in. She laughed out loud and stuffed a huge California roll in her mouth. Hiding in plain view. Hiding in style.

2) Though this is not a laugh-out-loud book, there is still humor that might make a person chuckle. In this example from Chapter 22, Hailey is doubting Malchi:

It was like he had a Hailey allergy. He was afraid to touch her, talk to her, even be in the same room with her. Why couldn't she just accept it? He was a raving, out-to-lunch, pass-the-drool-rag lunatic.

...That little ball of string he'd tried to hide in his pocket wasn't going to hold his weight. And the pieces of wood--was she crazy or were they sharpened stakes, like in the old Dracula movies? What kind of cuckoo's nest had she flown over? The guy lived in a tree, for crying out loud. He was in love with Eve and ran around like some kind of interdimensional Dr. Who with a sonic screw loose.

And a plastic squirt bottle.

3) There are some unexpected twists and details that make this story a fresh take on vampire mythology. I like it when a writer can take a familiar story and turn it around, turn it sideways, make it dance on its head, and yet retain a core that is true to the source material.

(I include no sample passages from the book here, because I don't want to give away details that are best discovered on one's own. Read the book!)
Posted by Keanan Brand at Wednesday, November 19, 2008

Enjoyed that three part book report. Some good tips there to keep in mind when writing too. Don't know if I'll get around to check out the book, but the breakdown of it here has me intrigued.

I've passed on a copy of the book to a friend and fellow writer, and am curious to hear her take on it. Our opinions diverge about as many times as they agree.

It's not a book I would have picked up on my own; I'm glad I read it, but probably won't read others by this author.