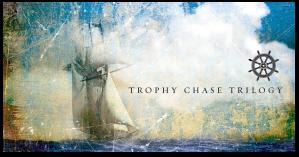 Those names are evocative of the setting and the time period of the story, as are the many character and place names, all sideways, but just "historical" enough to sound like they could have belonged to real people and places: Damrick Fellows, Nearing Vast, Spinner Sleeve, Dancer Clang, Skaelington, and more.

Names add dimension, add a layer of reality to the fiction, and play a hefty part in aiding the reader's "willing suspension of disbelief" -- or, in other words, a good set of names can help turn off the reader's internal lie detector that says, "This is just a story," and helps the audience enter in to the adventure. 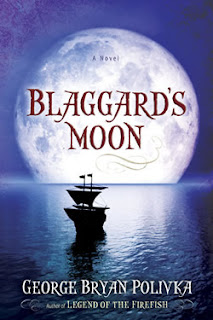 There were times while reading Blaggard's Moon that I forgot I was reading fantasy instead of a piece of historical fiction, not only because of the names often being so close to "reality", but also because of the details about ships, procedures, weapons, and more. They gave the story the weight of truth. However, none of that information made the story seem heavy or dull, but was woven into the action, adding to the interest.

Last year, when I thought my science fiction serial would head in a different direction than it has, I researched pirate information and terminology in books and online, even ordered a few texts, and Blaggard's Moon sent me back to the research, re-igniting my interest in all things nautical and piratical. Below are a few fun and interesting sites laden to the gunnels with cool vocabulary:

For readers who prefer nonfiction to a rousing good tale (Curse ye all for scurvy dogs!), here are a couple good sources: The Pirates Own Book, or Authentic Narratives of the Lives, Exploits, and Executions of the Most Celebrated Sea Robbers by Charles Ellms, first published in 1837, but released in paperback in recent years (and as a free downloadable e-book), and The Pirate Hunter: The True Story of Captain Kidd by Richard Zacks.

But I highly recommend reading Blaggard's Moon first, last, or right alongside all the facts. There are sea battles, games of wit and pirate's poker, sacrifices by men of honor, subtle illustrations of timeless truths, intriguing characters, all within a fantasy novel peopled by pirates. If this book were a ship, she'd be yar.

For other opinions on Blaggard's Moon, check out the CSFF Blog Tour stops listed in the lefthand sidebar.

And read the book!
Posted by Keanan Brand at Wednesday, April 22, 2009

Keanan, I'm just now catching up on others posts about the book, and yours are insightful man. Love the look into the meaning behind the title, and now, the names of the ships. Fascinating man...and thanks for the pirates source tips! : )

Aye Matey. You've blown me down. I'm hopin' I can get my sea legs under me in between swells. Pappy Hook

Dude! The pirate links are just what the doctor ordered! Thanks!

I'll second on the pirate links. I'm always looking for good resources there, for a certain September "holiday". Good work!

Alex - Muchas gracias, y de nada. Of all the books I've read as part of the CSFF Tour, this is my favorite so far. The next book is Tuck by Stephen Lawhead; I've enjoyed Hood and Scarlet, so I'm totally ready to dive into the third book.

Tex, uh, Pappy Hook - Once ye've got yer sea legs, it's land that trips ye up!

Phy - Hey, from one space pirate to another! (Kristoff and crew need to act more pirate-y, and not just like guys I'd like to hang out with. Ah, the pitfalls of really liking one's characters.)

Jason - Yeah, about September: I wonder what my fellow employees would do if I showed up at work in a striped shirt and raggedy britches, a fake parrot stuck to my shoulder, and a black bandanna on my head. Most of them would probably want to know if I had any extra bandannas around, so they could join the fun! (Forget the eyepatch, though; I need as much sight as possible, working at the Club.)