So, this month on the CSFF Blog Tour, we're talking science fiction, specifically Offworld, a near-futuristic thriller by Robin Parrish. 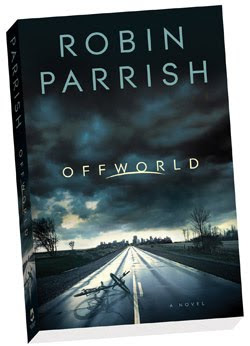 What's near future? It's only a few years distant from our own time, as opposed to being centuries down the road. The events of Offworld are set in 2033, with flashbacks to the previous year, and involve NASA and the first human footsteps on Mars, as well as an empty Earth with crazy weather, a strange black rift, and a handful of astronauts in a desperate search to find out what happened to all the humans and animals that once populated their home planet.

Oh, yeah, and there's a mysterious young woman named Mae who keeps telling the astronauts that she doesn't have a home -- she lives "between the cracks".

Let's meet the rest of the cast:

Christopher Burke, leader of the expedition to Mars -- "Blond, blue-eyed, handsome and strong, he'd always gotten more attention than he'd ever desired...He'd been preparing to be an astronaut his entire life, and so insecurity rarely troubled him. " I read that paragraph and was prepared to dislike this guy. Really. Perfection annoys me. However, turns out he has his imperfections, and I pretty much liked him by the end of the book.

Trisha Merriday, first officer -- Loyal and tough, with a secret or two, she's interesting in some respects, but dull in others. I sympathized with her personal plight, but never quite connected with her.

Owen Beechum, mission specialist -- He's an ambivalent character, set up to be either friend or antagonist, but with some interesting history and strong emotion. I won't tell which side of the story he ends up on, but he kept me guessing.

Terry Kessler, command module pilot -- The youngest and most erratic member of the crew, he pulls some crazy stunts, like halfway losing his mind and wandering around in boxer shorts, a scavenged collection of weapons tucked into his jacket. Actually, despite his defiance and bad calls, I thought this guy acted like anyone might when the mind is trying to assimilate all the horrific facts of an impossible situation.

And, once again, I won't spoil the story by telling whether or not he "straightens up and flies right" by the end of the book -- you'll just have to find that out for yourself.

In fact, you could win a FREE copy! (Free's good, right?) Comment here on any of the three posts for the August blog tour, or send me an e-mail (KeananBrand at yahoo dot com), and you're in. I'll draw the winner and announce the name by this coming weekend.

Meantime, check out other reviews of Offworld by visiting here:

I thought Parrish did a great job of depicting the "near future," actually--I pay a lot of attention to atmosphere in writing, and I found the atmosphere and details of 2033 utterly convincing. Even the walk on Mars. I too was prepared to dislike Chris, but I thought he was handled well after all.

I really liked the way you informed us about the characters. I look forward to being able to read this book myself one of these days. THanks for peeking my interest. Rae

Nice review! I agree with your summary of the characters. I also agree with Rachel that Parrish did a great job of effectively setting the right atmosphere for the book. This was a fun read.

Rachel - Yeah, I could buy into the bizarre because the near was so real. And I'm all for atmosphere! If I must describe something in detail, might as well add to the ambiance!

Rae - You're in the drawing -- maybe I'll be sending you a copy by the end of the week!

Dona - Thanks. I mentioned on someone's blog (wasn't yours, was it?) that, having visited many of the places the team travels through, I could easily visualize the settings, one bridge in particular. Very cool!