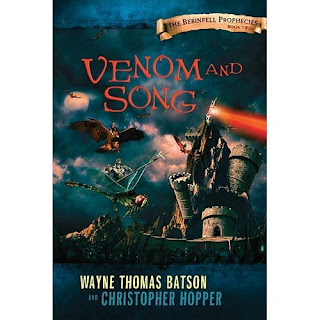 This month's CSFF blog tour entry is Venom and Song

, the second in The Berinfell Prophecies, a young adult fantasy series by Wayne Thomas Batson and Christopher Hopper.

, this novel dives right into the action. I haven't read the first book; and, while common thought might be that I would do so before reading the sequel, it was important to this review that I see how well a new reader could pick up the characters and the gist of the story.

A writerly aside: What's the point of a story if the readers can't follow the action? One test of good storytelling is how easily the audience can understand what it's being told. Artistic abstruseness is just pretentious, and is more than likely the high-sounding veneer of a lazy writer.

Now, back to our main programming.

Despite the almost too-hectic and sometimes protracted action -- more is not necessarily more -- and the overwhelming number of characters, the opening scenes of Venom and Song weren't difficult to follow. I liked the idea of the amusement-park-ride-on-steroids that was "the good guys'" journey via an underground river.

As for all the characters, an ensemble cast can keep a story tense and active, make it confusing, or bleed away the intrigue because readers don't know who to root for or don't care about what happens to the main characters. It's a tough task for authors to not only clearly differentiate between characters, but also keep them interesting. Though I didn't really care about this novel's characters at the beginning -- that's probably just the curmudgeon in me -- there's an automatic connection for the target audience: since the seven Lords of Berinfell are teenagers, readers from middle grades through high school will probably have immediate sympathy for the characters and be interested in how their story plays out over the course of the series.

There is violence and some frightening incidents, but there is also friendship and courage, and learning how to live and move forward in unexpected and less-than-ideal circumstances, ones that the characters did not choose. I would certainly let my 12-year-old niece read this book.

In conjunction with the CSSF Blog Tour, I received a free copy of this book from the publisher.

Hi, Brandon! Thanks for the sweet opening review. "Amusement Park Ride on Steroids" ---LOVE IT! That is totally what Christopher and I had in mind. Kind of a never ending log flume except, you could die. ;-)

Yeah, it did sound like fun -- except the dying part! (laugh)

Nice point about the amusement park water ride. Cavesurfers sound fun, but razorfish hovering below the falls make cavesurfing an Extreme Sport for sure. :D

I had trouble identifying with the characters through much of the book as well and shared my thoughts about that on my blog (which got omitted from many of the tour links due to a glitch in the code). But you've made a good point about why middle graders will perhaps find it easier to engage with the characters despite the large cast. I'm enjoying hearing all the different perspectives on the story!

Good review, Keanan! I'm looking forward to what you've got to say for Day 2 as well!

Sarah, if you send Becky an email about the code-glitch, maybe she'll email us about how to fix it. I prefer to direct readers to working links! :D

I like the point you made in the writerly aside.

Artistic abstruseness is just pretentious, and is more than likely the high-sounding veneer of a lazy writer.

Or, I might add, someone with very little if anything to say.

Fantasythyme -- Razorfish: tasty eating, except for the pesky sharp scales!

Sarah -- I tracked ya down and put the right code in the tour list, so folks can reach you from here. Thanks for visiting!

Phyllis -- Ever catch those "log rides" that can make you feel like you're underwater even though you're supposed to be on top of it? Or the Jurassic Park water ride at Universal Studios theme park -- Good times!

Krysti -- We approached this book from different perspectives, but it's cool to read all the various takes on the book.

Jeff -- I didn't consider that aspect, that a writer who's vague is one who probably doesn't have anything to say, but it's true. Thanks for stopping by!