On this second day of the CSFF Blog Tour, we return to the second novel in The Berinfell Prophecies by Wayne Thomas Batson and Christopher Hopper: Venom and Song

Okay, a few allusions or similarities that hit me while reading the book:

to describe the platforms the Elves built high in the trees); 2) "not all tears are evil" (a near-quote of the farewell spoken at the end of The Return of the King

, when Gandalf, Bilbo, and Frodo sail away with the Elves); 3) children who are royalty in another world than our own (the Pevensies in The Chronicles of Narnia

); 4) names of characters or places that are reminiscent of other stories (Elrain Galadhon, for instance, whose name is an allusion to Caras Galadhon, an elven city in The Lord of the Rings); 5) special training conducted by special teachers for students with special powers (though the obvious modern example is Hogwarts and Harry Potter, there is A Wizard of Earthsea

, and many, many others, though Venom and Song has a different focus than the control of magic).Hey, there's nothing wrong with paying homage to the great writers who've come before us. I've done it -- am doing it -- in a couple of projects. An homage is not theft nor is it basically re-writing someone else's work in one's own words; it's a nod, the acknowledgment of a fan or a student. Those of us writing new fantasy and science fiction owe much to Tolkien, Lewis, LeGuin, Yolen, and others. For some of us, it's as natural as breathing to tip the hat in our writing. (Pardon the cliches.)But back to Venom and Song--There is some cool originality here, such as the "frakes", Kat's name for the furry, purring, pink-nosed snakes found in Allyra; and there's the training session in which the only way the seven teenage Lords of Berinfell could navigate a dark chamber was by following a restricting set of instructions and relying on each other. 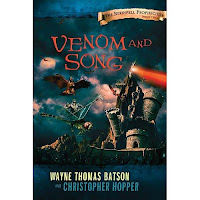 Not original and yet always and forever cool: names created by kenning, the Old Norse and Old English tradition of putting together two words to create an image for a single word. For instance, a class of Elven soldiers in the story are the Dreadnoughts; dreadnought means "fear nothing", and is a class of ship,  as well as the term for a thick, warm garment. Perhaps not necessarily true kenning (we don't know what the names are meant to represent), the Lords of Berinfell have some groovy tribal names: Hiddenblade, Swiftstorm, Ashheart, Valorbrand, Nightwing, Oakenflower, Silvertree. And then there's Grimwarden and Goldarrow, their teachers. What's not to like?But what about the story itself?
Weeeellll, though there were a couple pretty good parts in the first third of the book -- the river ride through the caves, the lordship ceremony, some of the training -- I didn't really get interested until Chapter 15, "The Scarlet Raptor", when a giant bird of prey summons Tommy and Kat to an unexplored region of Whitehall Castle, takes them on an unexpected journey, and a major secret is revealed.To be honest, I skipped entire pages in the first fourteen chapters (and even in a places later in the book) and picked up the action later. It didn't really keep my attention at first, and was often an effort to read -- not because nothing was going on in the story, but because I just didn't care. Though I knew Kat was blue, and there was mention of one of the boys having a temper problem and that Tommy liked puzzles,  aside from the fact that each of the Lords had a different gift, there were no real telling details to help differentiate among the characters, and the teenagers all seemed to have similar personalities. Of course, that might have been deliberate on the part of the authors, since themes include teamwork and reliance on one another. (But I've read a blog or two on the tour that mentioned how different each character is, and how easy it is to tell them apart.)As I mentioned in yesterday's post, my experience might have been different if I'd read the first book, or if I weren't such a curmudgeon. When a writer is coordinating a large cast of characters, sometimes it becomes unwieldy, and in trying to mention everyone, the writer can actually spread the reader's attention too thin. Given too much information, the audience can shut down -- I did. As a result, the tension/suspense can bleed away, leaving scenes flat and uninteresting. In Chapter 15, though, the story narrowed, intriguing events unfolded, and my attention increased.But this book wasn't written for middle-aged folks like me. I work with kids and teenagers who are always on the prowl for good reads, and this series will be on my "Recommended" list, especially when the annual reading contest starts again in January. I've already talked up the series and promised a group of teenagers that this book will be in a drawing to be held in a couple of weeks, and they are all excited. (Free book! And it's a fantasy! How can there not be confetti and stuff?)For other stops on the tour, visit yesterday's post, scroll to the end, and click on any of the names in the list there.


(FYI: Amazon doesn't offer any sample chapters of Hopper's solo work -- The Rise of the Dibor

-- but Batson's work can be sampled.) In conjunction with the CSSF Blog Tour, I received a free copy of this book from the publisher.

Good stuff, Brandon. You nailed the allusions there. Tolkien was my teacher (figuratively speaking, of course). And accurate names are a passion of mine. Ask Christopher. I can spend ridiculous amounts of time on names. CH on the other hand, can often just "come up" with the perfect name on the fly. lol We're a good team. ;-)

Nice post, Keanan. I enjoyed the discussion of kenning, which I'd not encountered before.

Neat comments about the kenning. I hadn't heard about that before, and now that I know about it, I really like it (and may borrow it somewhere sometime)!

The characters and their personalities were really well established in the first book, and this is where the second leans more heavily on the first. There's a whole lot of clues in the first book that shape how the different teens reacted later; why one teen is having identity issues because she's blue, and another is having issues with rejection. I really encourage you to read the first book, then come back and read all those pages you skipped! :D

I noticed some of those allusions as well and thought it was an interesting way of paying tribute to other fantasy authors.

The term kenning was unfamiliar to me...but fascinating. Thanks for sharing!

I saw a lot of the relations there too! Great post!

Wayne -- In my imaginary worlds, I'm a bit of a name geek and can get totally caught up in reading lists of names and their meanings, even though the names of real people can escape me. I really enjoyed seeing some of the names you guys chose.

Fred, Krysti, and Sarah -- Kenning is SO cool! An intriguing, fun way to give medieval-type stories a really old feel.

Amydeane -- Glad to know I'm not the only geek that's picking up on all the little stuff!