Zeph stared at the Indian. "We've met before, haven't we?"

"Ha!" Little Weaver clapped his gloved hands. "A shred of sanity!" Then he leaned toward Zeph. "At some point, Brother Walker, you will have to trust again."

Zeph's eyes were locked upon the Indian. Then his shoulders slumped. "That's what I was afraid of."  (p172)


When the people around town start behaving strangely, knowing who to trust becomes a challenge in this month's CSFF Blog Tour feature: The Telling, a speculative novel by Mike Duran, author of The Resurrection. And what's the story behind the town's mass suicide over a hundred years ago, and what truth is there to the legend about the ninth gate of hell?

Human grief and hubris unlocked it. Zeph Walker is the key that will close it once more. 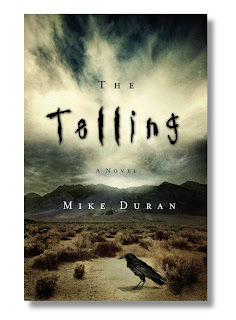 If only he can overcome his past: a childhood marked by the gift of prophecy; manipulation and abuse by his mother and stepmother; and the grief and regrets that keep him locked inside a world of his own making.

You aren't a prophet, the phantom hissed. The blade proved it.

Sadness. So much of it inside him. Her words seemed to reawaken the venom of bitterness. Zeph swayed back, overtaken by a great darkness looming on the periphery of his mind.

You are the son of silence. Sickly glowing eyes peered at him from deep inside the mine shaft. And now you've gone and killed someone. (p213)


I could analyze this novel, and dive into spiritual applications or ramifications, but I won't. This is fiction, and anyone seeking a one-to-one correlation with the Bible will not find it here. There are no sermons. No allegories. There is a serious struggle between the darkness and the light, and flawed characters who are drawn into the fight. Some lose the battle, but some emerge stronger because of it.

For readers looking for suspense, action, a touch of horror, they'll find it in the pages of The Telling. It's an intriguing read.

Anyone who has ever had to fight for his faith, has ever had to walk alone because of deep wounds, has ever endured abuse and struggled to find hope or love on the other side, will likely connect with Zeph Walker as he wrestles with truth, failure, forgiveness.

Loved all 3 of your posts about this book. It was a great read and I must get Mike's other books now!

I enjoyed all three of your posts! I too liked how Mike incorporated a clearly delineated battle of good versus evil without preaching. Sometimes that can be a fine line to walk and I think Mike did it very well.

Sounds like an awesome read! I'll definitely have to pick it up.

"This is fiction, and anyone seeking a one-to-one correlation with the Bible will not find it here. There are no sermons. No allegories."

Well said. I would add: "And there shouldn't be."