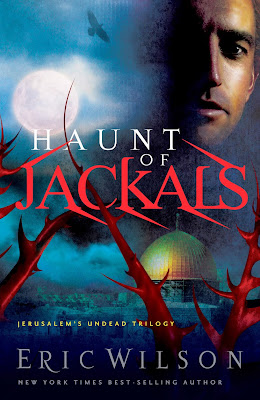 This month's CSFF Blog Tour features Haunt of Jackals, sequel to Field of Blood in the Jerusalem's Undead trilogy by Eric Wilson.

In this series, Wilson presents a fresh imagining of vampire mythology: Collectors and Concealed Ones, Those Who Hunt and Those Who Resist. Collectors need bodies to inhabit in order to prey upon humanity; Concealed Ones are chosen humans, marked by God, immortal, and commissioned with the protection of humanity. They recruit and work with Those Who Resist, people who follow the Nazarene and oppose the Master Collector.

It is a complicated tale Wilson endeavors; although readers might pick up everything they need in "What Came Before" at the beginning of Haunt of Jackals, I recommend they first read Field of Blood. Although FoB is not the focus of the tour, I will -- for the sake of continuity -- discuss both books.

Aside from a few interesting twists on the old material, and all the roles blood (divine and human) plays in the story, as well as the inclusion of Talmudic and Biblical tradition, I found the first book plodding until about Chapter 39, nearly 300 pages in -- not exactly a good sign that I'd find the next book any more exciting.

However, the foundation having been well established in Field of Blood, Haunt of Jackals takes off with plenty of action, beginning on the heels of the climactic fight that ended the previous book. The characters also start acting their parts. Well, the Collectors (vampires) acted their parts in the first book, too, even more so than the protagonists, who seemed to do a lot of talking and thinking and angsty brooding before they finally started kicking vampiric butt near the end.

In Haunt of Jackals, Wilson has the protagonists on the move -- chasing, fleeing, hiding, calling out Collectors, fighting -- and the good guys take down a few vampires and get the Akeldama Cluster in a bit of a twist.

But there's been a vampire missing since the Akeldama Collectors rejuvenated the bodies of two long-dead families, the Houses of Eros and Ariston: the Collector who inhabits the body of Natira, the globetrotting son of the twice-dead Ariston, massive, strong, and the true leader of the house. He's looking for Concealed Ones, and planning a massive strike that will take them all down at once. He's found twenty; only sixteen to go.

There is an intriguing blend of historical fact, Scripture, legend, and modern culture, all mixed together with imagination and intelligence. Over the next two days, I will discuss that mix, as well as some of the questions that arose while I read.

A list of the other stops on the tour -- which means other opinions and insights on the novel -- will be posted as soon as it is made available.
Posted by Keanan Brand at Monday, October 19, 2009

Thanks for your comment, Keanan! I agree -- I didn't really like this book, but I am all for controversial work in the marketplace, especially the CBA marketplace. I like books that get people thinking and talking.

I agree, this book was light years better than the first. I guess book one had to lay some ground work, I don't know.

I enjoyed the action in HAUNT OF JACKALS. And there was more of CAL. I liked Cal.

Keanan, thanks for your insightful review. I also think Eric Wilson knows what he is doing!

I agree that Book 1 was very slow to get started, I hadn't thought of combining the two into one condensed volume, but it certainly would have helped with the pacing issues in Field of Blood.

Hey, y'all, thanks for stopping by and contributing to the discussion!