Read previous Opening Salvos here:
1 - In a Dark Wood by Michael Cadnum,
2 - Old Man's War by John Scalzi, and
3 - The Queen of Bedlam by Robert McCammon.

It's been a while since the last installment in the Opening Salvos series, and all the stories have had an air of the fantastic about them: a retelling of the Robin Hood legend from the Sheriff of Nottingham's point of view, a science fiction tale in which the aged receive new bodies and new leases on life, and a colonial mystery with a strong element of the strange. The latest installment features the first in the Jerusalem's Undead trilogy by Eric Wilson, Field of Blood. 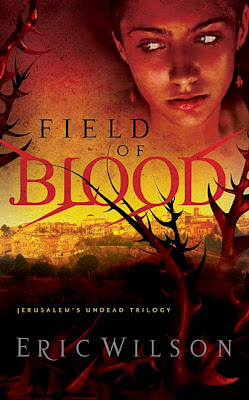 What happens when an ancient family tomb is opened, and the blood of a dying man awakens the dead? This is not some holy salvation, but the unleashing of evil that has been waiting since the day a traitor hanged himself, and the blood money he was paid for his betrayal was used to purchase a field that came to be called Akeldema (also, Aceldema), "the field of blood":

The Man from Kerioth dangled over hard earth. His breath was ragged, his fingers grasping at the noose that clung to a gnarled olive tree. His larynx, nearly crushed by the short plunge, worked against the rope.

Air. One gulp, that's all he needed. Just one.

Despite this struggle for oxygen, he could not quell the whispers in his head: There is a way back, even still . . .

The sun rose orange and pregnant over the Mount of Olives, giving birth to purple shadows. His lungs heaved. He kicked in desperation, and his body twisted on the rope, providing him a glimpse of the city walls along the opposing ridge.

Those walls, they were were infested with Roman swine. He’d longed— oh, how he had longed—to join an uprising that would restore this city to the Jews. He had even aligned himself with a band of dagger-men, the Sacarii, but when their zealotry floundered amid internal rivalries, he’d hedged his bets instead on the aspirations of a Nazarene.

I've had this book for about a month, and there are still have a few chapters to go (125 pages). These opening paragraphs pulled me in to the story, and there have been chapters since that aroused my interest, but large chunks of the novel just don't grab me. I don't know if that's a result of my distracting schedule during this past month, or just disinterest in particular parts of the story. However, the opening lines did their job and, like Jerusalem's Undead, lured me down the path.

The sequel, Haunt of Jackals, is the focus of the October CSFF Blog Tour, so I reckon I'd better hurry up and finish the first book!
Posted by Keanan Brand at Tuesday, October 06, 2009

hey keanan - I wanted to let you know about my blog address change. *sigh* If you're following me, my posts now won't show up in your feed, dashboard, sidebar, whatever. So please forgive me, but you'll have to change the address for my main writing blog, Where Romance Meets Therapy, to http://jeanniecampbell.blogspot.com. To do this, you have to "unfollow" me and follow me again. Sorry for the confusion!

Thanks for the heads-up; I've made the changes.