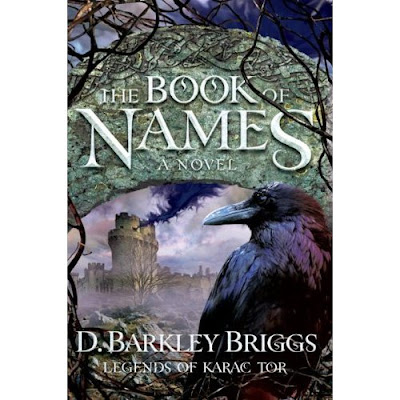 The January Christian Science Fiction & Fantasy Blog Tour is highlighting the young adult fantasy, the first in the Legends of Karac Tor series, The Book of Names by D. Barkley Briggs.

The Kingdom of Karak Tor is the myth-soaked setting of the tale of two modern teen brothers who find themselves thrust into an adventure far removed from their everyday lives.

This book arrived just in time for a Christmas visit from my brother's family, and my oldest niece, Jamie, devoured it and the sneak peak at the end (for the second book in the series, Corus the Champion, due Spring 2009). Jamie is a thin ten-year-old girl close to five feet tall, with glasses, long straight hair, and a decisive manner of speaking. I interviewed her the morning she finished reading The Book of Names, and below is an edited-down portion of what she had to say about it:

Q. So, whaddya think of the opening?
A. It really grabbed my attention, made me want to read the rest of the book.

Q. And the poem before the first chapter?
A. It felt ancient and mysterious, and I didn’t really understand it at first, but that’s the reason I wanted to read the rest of the book, to see if it would explain a little more about the poem.

Q. What's Karak Tor like?
A. It seems ancient, and mostly peaceful.

Newland, the town where the boys live--it’s kind of out in the country, in modern times, in the United States. They live on a farm, but they don’t have animals, because their father was actually a college professor. I liked the setting.

Q. Any thoughts on the story itself?
A. It had some funny parts. For instance, one of Hadyn’s younger brothers, not Ewan, said, ‘Kracter,’ instead of ‘Karac Tor.’ He doesn’t appear in Karac Tor until the very end of the story, though.

It had a bit of a sad part, when Hadyn got swiped by Nemesia the witch. He did get rescued, though, and that part was happy.

I would recommend the book to other kids my age, and older, too. It’s an adventure, and a bit of a mystery. I can’t wait for the next book!

For other opinions on The Book of Names, visit any of the blogs listed in the left-hand sidebar under the CSFF Blog Tour heading.
Happy Reading!
Posted by Keanan Brand at Monday, January 19, 2009

Now that's amazing--a ten-year-old who is capture by a poem and wants to read a 370 page book to find out what the poem means. I'm impressed!

And this is a great post, Keanan. Though your niece is a little younger than the target audience, I think her reaction still gives the idea of what YAs will think about the book.

Cool to know this book hits the target!

Becky - Yeah, she's something! We get along pretty well, probably because we think a lot alike (I like the poem, too), and we're book hounds.

Valerie - Excellent news, indeed, for Mr. Briggs. I'm not among the target audience, and my personal response is a little different, but I'll discuss that on the last day of the tour.