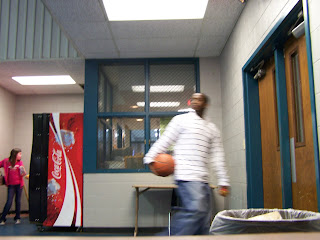 Basketball season is in full swing at the Boys & Girls Club.

Here are a couple shots taken from the concession stand when I had to man the battle station one day back in December.

The first photo is of a staff member on his way out the door after collecting a stray basketball right before a scheduled practice. The flash was off, and the camera was steadied on the concession counter instead of a tripod, but I wanted the blur so there's motion to the picture.

Shooting under the gym lights can cast a grey or greenish hue over the pictures, but using the flash can wash out the subjects and make them look like they're standing in a cave. 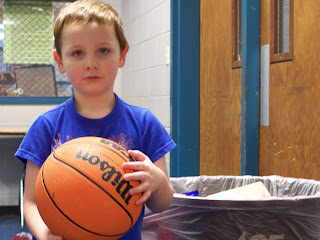 The second shot is of a boy on his way to practice, but I think he was only a spectator, being too young for the team. (My memory is kinda fuzzy; I've slept since then, as the saying goes.) Like the way I included a nice view of the concession trash? I wasn't paying attention to the background clutter, or I'd have framed the photo differently.

And how about a shot of the snack chips waiting to be devoured by hungry kids with more cash in their pockets in a week than I have in a month? 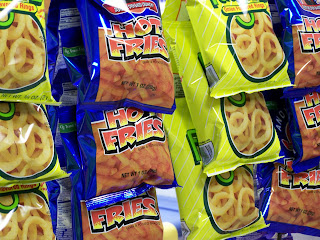 (I give myself an allowance for movies or whatever, but the rest stays in the checkbook.)

I'm nowhere near where I want to be when it comes to decent photography. Wish I had better equipment and more time.

Yeah, popsicles got a greater reaction from the kids than the thought of $50. Just goes to show that the old saying about one man's trash being another man's treasure has many applications.