Well, not just risk: faith and adventure, and both of those might involve risk. If one's faith isn't misplaced, there's no risk at all. If there's someone strong anchoring the other end of a good rope, and if the caribiner clip holds, the adventure holds minimal risk, as well. But what if--?

This past week, I've indulged my love of movies by watching a few that have been recently released on DVD. A couple of them have, in the mental sense, been following me around: Faith Like Potatoes and Defiance, both of them true stories, their screenplays based on books, and both about men who took risks.

In Faith Like Potatoes, Angus Buchan and his family flee violence in Zambia and take up residence in a tiny travel trailer on a farm in South Africa. His children don't seem downhearted at all by what might, to them, have been an adventure -- whenever my family moved, it was an adventure, even if I was uncertain of the future -- and even his very pregnant wife doesn't complain about the necessity of living in such reduced circumstances until a proper house can be built.

Angus, however, is an angry, driven man, and an old stump that he just can't dig up or chop away serves as a visual obstacle to all the turmoil inside him. Despite his anger, the locals help and befriend him anyway, and Angus turns to God. What follows is a story of, in many ways, greater risk than he faced when saving his family or starting over on a new farm.

(Read here for a more jaundiced view of Mr. Buchan and his message, on a blog written by a South African Christian.) 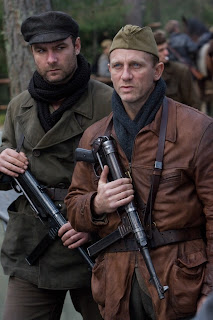 In Defiance, Tuvia Bielski and his brothers help save fellow Jews by hiding in the Nalibocka Forest of Belarus. The Bielskis lose parents, wives, children, friends, but they refuse to let the Germans and the anti-Semites win without a fight: If they give up, they will certainly die, but if they resist, they just might survive.

They live for months in the forest, and endure great hardships and losses, but though the forest becomes almost entirely surrounded by the German army, their efforts become the greatest rescue of Jews by Jews in the course of World War II.

(Read here for a review of the movie along with some critical comment.)

After watching these stories, something in me wants to know if I could do what those men did, and refuse to give up despite appearances, the low expectations of others, and all the troubles that rose up to block the path forward. Knowing failure was the most likely outcome but was by no means an option, would I answer the challenge? Would I take the risk?
Posted by Keanan Brand at Friday, June 26, 2009

Bubba! (By the way, best wishes to Niece #2 on her second birthday.)

My "what if" involves the idea of pulling up roots, once more changing the dynamic of not only my life but the family's, too. I'll discuss it further in the next post or two, as I continue to mull stuff over in my round-about way.

Thanks for the words, by the way. I don't want to get to the end of my life and still be wondering "What if?" and "If only."

I totally get it, though: I have changed a lot in the past few years, I was having this discussion with a friend about how shy I used to be, and they're like: yeah, you're so different now.

I admire people who can make big changes in life, since I hated most moves I had to deal with when growing up.

When is Bubba going to have his own blog?(grin)