This post continues the discussion on risk, which will eventually link up with the theme of this blog -- telling stories -- in a future post. (The first entry about risk can be read here.)

Risk is a word most associated with finance, war, insurance, or teenagers, but risk is also often used as shorthand for irresponsible behavior, ill preparation, or some combination of the two. (Case in point: Christopher McCandless, he of Into the Wild by John KraKauer, and the film by Sean Penn -- I don't care how much solitude he hoped to collect, the boy shoulda prepared for the wilderness. )

Yet is there ever a time when risk is the responsible path? When, given a choice between known or unknown, safety or freedom, safety is not the safe choice?

What freedoms, when sacrificed for safety, are ever worth the loss?

When does a man take a stand and say, "No more. I will not live my days huddled in the narrow confines of what I know. I will not die wrapped in a security blanket. Come what may, I will live free"? 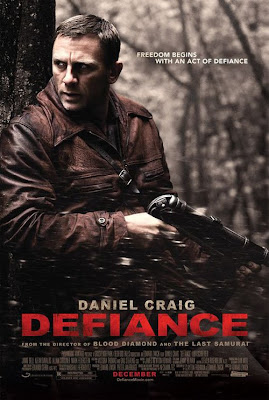 I do know this: Risk can be answered, even when one is not expecting it. In the case of the Bielski brothers in the film Defiance, they were placed--like their ancestress, Esther--in that place "for such a time as this" (Esther 4:14, Holy Bible). They had served in the military. They had smuggled. They were familiar with the countryside. Though they had little in the way of weapons or survival gear, when trouble came, they were prepared to meet it.

And more than meet it. Hitler himself tried to root them out of the forest, but they and their band of Jewish survivors did not yield.

For them, the risk was the responsible path.

While we talked by phone this past Saturday night, my brother mentioned the fact that all the jobs he has done play a part in what he does now. During OTS last year, his instructors drilled into him and the other potentially commissioned officers the weight of leadership that they would be shouldering. My brother didn't feel that weight; he'd already been carrying it. Almost the entire time he has been in the Air Force, he has stepped into places of leadership that are not expected of his rank, whatever it has happened to be at the time. He hasn't usurped someone else's authority, or taken on what didn't belong to him, but was either assigned duties or took on responsibilities that others didn't fill. He is doing that even now, until someone of the proper rank can take a particular position.

Just as the Bielski brothers were prepared by their life experiences to take on the mantle of Moses and set their people free, my brother has been prepared in unexpected, even mundane, ways to take on the tasks he now performs. His role has not been as dramatic or as challenging as theirs, but one cannot know the future. He may have a grand part to play in troubles that have not yet risen. (And, no matter what comes, Bubba, you're my hero.)

When he first began his pursuit of a commission, he had no guarantees. There were conditions to be met before he could even begin the process to apply. At any step, his way could have been blocked. There would be no recouping of money or time lost. Yet he began the journey, determined that, even if he failed, he would keep trying until he was told, "No more. All your chances are exhausted."

He prepared, he persevered, and several years later, having jumped successfully through all those hoops, is now on the path he was prevented from traveling when he first entered the military.

Why? Because "when you get to the point that this is unacceptable, you take steps to change it. But you don't change until your dissatisfaction with where you are outweighs the risk of stepping out on faith."

Sounds a little like the confessions of an addict, doesn't it?

Hello. My name is Keanan. I'm tired of playing it safe.
Posted by Keanan Brand at Tuesday, June 30, 2009

Great post. I want to see "Defiance", didn't get a chance when it was in the theater, but I'm renting it now.

Thanks for the inspiration: as we've discussed, a cushy job is a good thing, but there is so much more to life. But as you say--better to not face risks totally unprepared.

"A contented slave does not rebel"--that's from an old free verse poem I wrote years ago. I need to feel that way again, like when I wrote it!

I'm not trying to beat readers over the head with the whole Defiance thing, but it did make an impression on me.

That's a great line, and it's true. Why leave if you feel no compulsion to do so? If you don't think it's necessary?

I'm getting to the point where it's imperative.