The CSFF Blog Tour's June feature is Vanish by Tom Pawlik. It's his debut novel, but readers wouldn't know it. It's a humdinger of a tale, and even gave me the creeps in a couple scenes, but that's not a bad thing. Not a bad thing at all. Many stories -- and movies -- that promise the weird and the creepy often descend into gore, or telegraph scares that end up being un-scary, or become just plain cheesy in sad, laughable attempts to keep the audience on the edge of their seats. 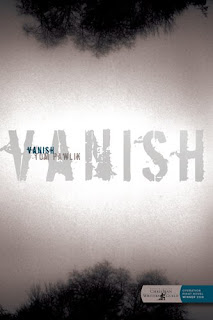 Mr. Pawlik had my attention from the get-go, and he didn't lose it, not even on the last page, with its ironic and darkly humorous ending. In fact, I would have kept reading to find out what happened to other characters -- a good story can't be long enough -- and, turns out, there is more: the sequel, Valley of the Shadow, is out this month.

Back to Vanish: Connor Hayden, a lawyer in Chicago, goes throughout the workday with the strange sensation that he's being watched. Later that night, he watches an unusual storm front approach. He wakens the next morning to a deserted city in which he appears to be the last inhabitant.

The same occurs for an aging former model, a couple of street kids with guns, and a young man on his way to propose to his girlfriend. They all wake up in an empty world, yet they come together through a variety of circumstances, and form a band of survivors trying to elude the strange grey "aliens" whose touch burns even as it chills.

I'm not one for stories of space aliens, but -- if you're like me -- don't let this brief synopsis turn you away from an awesome story. In the desolate, desperate world of Vanish, all is not as it seems.

Read the first chapter here, and then buy the book and read the whole thing. Betcha can't stop!

I definitely agree that it's hard to put down! I don't read thrillers often, but it's fun to get pulled into one now and again and taken for a good ride :).

This one caught me from the get go. I wasn't sure about it just from reading the back cover but man, it just takes off!! I never saw the ending coming either!! I can hardly wait to get my hands on Valley of the Shadows!!

Keanan, you did a great job setting up the story without giving the end away. I don't know if I'll be able to do that, but I hope so. It would be such a shame to know the end of this one before hand.

This is not my favorite side of speculative, but I really liked this book. Glad to see others had the same reaction I did.

Though I wasn't thinking on the positive side as I read, I would definitely recommend it now, and have to my daughter and her friends. (teenagers)

I want to read it, but don't want to get too influenced about fictional alien characters just now--since I'm still writing that short story whose un-writable-ness I told you about.

But after I'm done with that--definitely!

Rachel and Julie - I'm glad I gave it a chance, too, because the whole notion of "aliens" didn't appeal to me. But it is a kicker of a story!

Becky - Thanks! And, yes, I will do what I can to keep the end a surprise.

Pixy and Beth - Yep, creepy, but not for creepiness' sake. There is definitely a redemptive side. I'll be loaning my copy today to a teenager at the Club who expressed interest.

Jade - Note that "aliens" is in quotes. This book may not mess with your science fiction the way you might think.

One of the things that surprised me was the lack of gore. There is some violence, and it is creepy in places, but there's no splatter involved here.

I thought the "alien" angle would be problematic, but the theology was generally straightforward, though I do disagree with an implied point.

Steve - I hadn't even given thought to the lack of gore. Just like good dialogue doesn't require foul language in order to make it intense, a good action scene in a horror story doesn't require blood, guts, and brains. Excellent point!