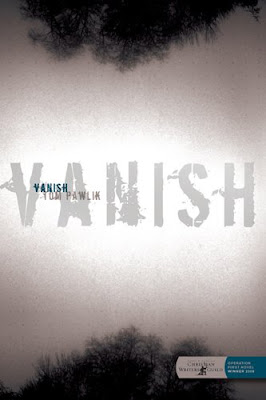 On the third and final day of the June CSFF Blog Tour, featuring Tom Pawlik's excellent suspense novel, Vanish, is a brief discussion how the story meets Christianity.

First, a sideways disagreement with the book by another reader: On the Amazon.com page for Vanish are included several comments on the book, most of them rave reviews, but the following is less than satisfactory -- not because of the quality of the story or because the writing was somehow sub par, but because of the faith of the author:

Why is the author and publisher hiding that this is a christian book? As a Jew, I don't care or want to read Christianity themed or inspired works. Readers of other beliefs, I'm sure woud feel similar. Whether you feel the same or want to read such titles, Amazon and the publisher has a responsibility to let the customer know. This is not the first book I read the review of today on my kindle that had a hidden Xtian message\agenda!

At the risk of sounding snarky, the above reader must not have paid much attention to the Christian Writers Guild label right there on the front cover. Neither the author nor the publisher is hiding their faith. If a reader sees that label and chooses to pick up the book and read it, then he or she does so with fair warning.

That being said, I have read books with decidedly anti-Christian or non-Christian slants, and while I may not have agreed with them, I did not feel my faith at all threatened as a result. I already know what I believe, and why I believe it. Simply because there is a contrary argument out there, or a work of fiction that presents a contrary view, does not mean I must believe it, or that it must sway my faith. So I'm curious as to why the reviewer felt obligated to remark as she did. (shrug)

Second, that being said, this story is not a direct correlation to the Bible. Though the Bible contains stories, it is not a work of fiction (despite what our atheist friends might want us to believe). Vanish is a story. Though there might be instruction in its pages, a story's first job is to entertain, and Vanish does that quite well.

Third, the allegorical role of Christ is fulfilled by the "mute" boy, who is described as appearing about 9 years old, corresponding to the age the central character's son would have been, had he lived. "Son" was my first reaction. The boy is not a direct parallel with Christ, though he fills a certain redemptive role (saving Connor from the edge, holes in his wrists, the blood dripping from the wounds). However, his being startled by the "aliens", and his apparent fear in the graveyard and at the boat dock jars with the character of Christ as we know Him from the Bible: He would not fear evil or the unknown, because 1) His power is greater than any evil, and 2) nothing is unknown to Him.

Side note: Were I not familiar with House by Frank Peretti & Ted Dekker, I might not have already been wondering throughout the story if the boy were either Connor's son or some sort of redemptive figure. The ending, then, might have been even more of a surprise.

The boy's disappearance from the boat is never explained (unless I totally missed that part in my voracious consumption of the book), nor is his presence in the Interworld between life and death, though that presence is integral to the plot.

Fourth, how does Howard, a human being in a comatose state in the living realm, become Death, the keeper of the gateway between worlds? Maybe that's explained in the sequel.

Despite my questions about a couple of matters in the plot, the book is overall a solid entry into the speculative fiction family, and I highly recommend it to anyone looking for a gripping, thought-provoking, and entertaining read.

For other views, check out the list of bloggers in the sidebar under the CSFF Blog Tour heading.
Posted by Keanan Brand at Wednesday, June 24, 2009

And I like your new blog heading with the two dragons.

Everyone has an agenda, whether they know it or not, whether they cop to it or not. Why must Christians, specifically, be expected to a) identify, and b) announce theirs?

Ideas are infectious. Agendas are not.

During Robert Heinlein's writing life, he wrote from both ardent Liberal and ardent Conservative viewpoints. I couldn't tell you which books were representative of which. What I remember are the stories.

As Christians, what people should remember from our works are the stories and the ideas. If people go into a book expecting agenda (for or against), they're doing it wrong.

Like Dan Simmons, like Walter Mosley, like John Grisham, I refuse to be pigeon-holed into one genre or one agenda. I don't read all of Orson Scott Card's books because he's Mormon. I read the ones I do because of the story he's telling and the way he's telling it. I enjoyed the first two Ender's books, and all the Ender's Shadow books. I didn't care for his magical realism novel premise. I really didn't care for his alternate future political concept. That doesn't mean I am or am not reading Card because of his private faith. It means I am or am not reading his books on their own merit. Novel concept.

I spotted that amazon review as well. It brings up a couple of interesting points. First is that some people just don't pay attention. It's difficult to plan for that because as a writer, you do what you do and expect at least some amount of competence from prospective readers. I suppose a sale is a sale but you'd like to be appreciated for the effort you put into something.

Second is the need for people get worked up about hidden religious messages. Are they afraid they'll be converted to Christianity? Their response would of course be, "Well, no not me. I'm secure in my beliefs. But someone else might be swayed." Welll... Is that such a bad things? What business is it of theirs if someone else believes one thing or another? The answer to that reveals more about them then they think.

I see that you had some of the same questions I did (see "Double, double" in my third post).

As for the stealth Christianity charge, I've seen it leveled at books that were extremely overt. I'm surprised that someone who couldn't read the cover managed to get through the book.

When Howard first showed up, I thought he was going to be the Christ figure (yes, I had the aliens pegged as demons early on). In retrospect, I could see the boy as a representative of Christ, but I think he should have been more a type than an allegorical figure. But it's Tom's story, not mine, so ... Yet, that does open up the points you make about the boy's fear, unexplained disappearance, and all.

Robert - Thanks! That photo of the dragons is one I took in 2006 (I think) down in Orlando when I was a chaperon for one of the BGCA national photography winners. The dragons guard the entrance to the Dueling Dragons roller coaster ride.

Phy - Amen, brother. I'd rather have my work judged as being well-written or not, a good story or not, aside from faith or perspective. I want to know that I'm doing my job as a storyteller.

Jeff - I had to smile, because I do get the sense of "Oooh, scary!" when people feel themselves threatened by Christians, Christianity, or anything with the name of Christ attached (other than a swear word). As for competent readers, well, as a writer, I can only do so much: I put the words on the page, but I can't read them on behalf of the person who simply will not. It irritates me when a reader tells me I haven't included a piece of information, or I never introduced a character, and I have to point them back to the previous page, paragraph, etcetera.

Steve - (Confession: I stole the spoiler font idea from IMDB.com.) I get the impression she didn't even read the book, just the review on Kindle, so what's the point of her rant? I don't get it.

If we were all like her, would we go find the first overtly Jewish-theology-based novel we find, and tear it up based solely on the faith of the author? What point would that serve? (shakes head)

Becky - Thanks! I didn't mention it in my post, but I thought at first that Howard was one of the good guys. He started to seem a little too convenient, though, a little too fortunate to have survived the "aliens" for so long. But that's an excellent parallel with Satan appearing as an angel of light.

funny about the comment, I had read someone complain there wasn't enuf christianity in it! lol

I enjoyed it and thought that it left a lot for my imagination to work with! (which I appreciate!)

Not enough?? Must not have read the same book we did.